Admirals Cove Foundation, the philanthropic foundation of The Club of Admirals Cove, capped off their 2017/2018 Season of Giving at their Community Grant Celebration on March 26th.

During the event an inaugural ACF Champion of the Year award was presented to Club member and resident Charles Ezrine for his ongoing volunteer efforts in promoting the foundation throughout the community of Admirals Cove.

With overwhelming philanthropic support from Admirals Cove Club members, the 2017/2018 ACF Season of Giving has contributed over $1.2 million dollars through member directed gifts and grants. “It is exciting to see a community come together and take an active part in fulfilling the needs of our Palm Beach County neighbors,” said Rebecca Divine executive director of the Admirals Cove Foundation. “Residents not only give financially but they also take great pride in volunteering their time and experience to support the missions of local nonprofits.

During this 2017/2018 Season of Giving Admirals Cove Foundation donated 679 meals to Feeding South Florida during Thanksgiving, gifted $9,200 to offset the financial struggles of a single mother from Palm Beach County whose 7-year-old daughter is battling leukemia, held a community toy drive to give this family a Season to Share holiday, conducted a pet supply drive to benefit Furry Friends, and contributed alongside the Club Managers Association to provide school supplies for students returning to the Marjory Stoneman Douglass High School. “Our goal is to have a vital culture of community giving,” said Divine. 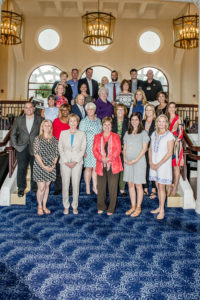